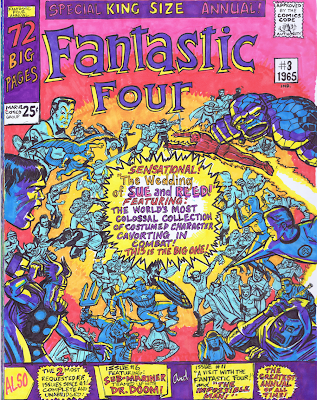 28 days! 28 covers! Wow! Never thought I’d actually get to this point–but here it is and I just made it–just barely, that is! Up till the last minute I was coloring away with my prismacolors, oblivious to just about everything else going on in the house (or the world)–snow, rain, ice-for me, the weekend was all about “imperial violet” or “parma violet”? “rose pink” or “process red”? What? You said there’s a glacier on the roof about to cause a cave in? I’ll get to it in a minute, dear– after I finish coloring in Dr. Doom.
So— how to wind up my month-long blog-a-thon ? I wanted something special to mark the occasion–and well, what’s better than a wedding? And what wedding–in all of history–in all the known and unknown galaxies– could compare to that of Reed and Sue?
We all know the answer to that one true believers!
And what a cover it is! Practically every known super-goodie or super-baddie in the Marvel universe circa 1965 shows up for the happy couple’s big day! Kirby went to town on this sucker and delivered the goods baby! It’s just a damn shame Stan Lee put Jack’s interior pages in the hands of Vince Colletta.  It looks like Colletta used just one tiny size rapidograph for the entire issue.  Practically ruins the entire event. But not that cover, boy! No sirree! I’m guessing Joe Sinnott inked the cover for FF King Size #3!–and the difference shows. 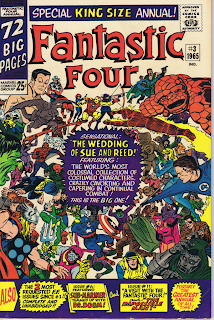 Drawing this one was a much about mapping as drawing, really. Talk about an exercise in frustration! Because the proportions between my sketchbook and the original comic are different–there’s a good deal of futzing that goes on in the attempt to replicate that space and all those characters.
The attraction of the original is in part owing to the color choice–the simplicity of the white ground against the myriad of colored do-gooders and do-baddies, coupled with the deep purple and bright red logo, makes for a compelling package. I thought it’d be silly to recreate that color-it’d just be filling in the figures, really. So, why not go somewhere else with it? And so I made the ground more active–and simplified the figures. Defeats the purpose, really–given that the guest stars are the selling point–and you want to emphasize them–not suppress them. But–I’m not selling anything, so what the hell?
Anyway-while we’ve reached the conclusion of this project, the endeavor goes on–so I’ll be back with something new soon. What might that be, exactly? I have no idea. There are a lot of comic book covers out there–and a bunch of my own I didn’t get to–so maybe I’ll be back with one or two every now and again. Or maybe something entirely different. Check back and see! 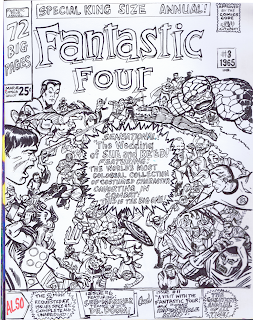