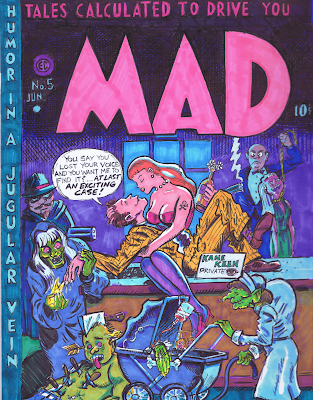 I’m ten years too young for the original Mad, but these comics were still around, in one form or another, throughout my childhood in the 1960’s. I think my first exposure to the original Mad was via those great paperback collections somebody’s older brother had. They got passed around the neighborhood 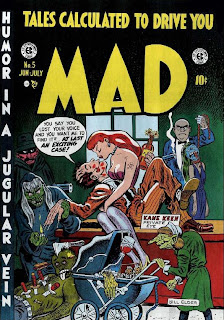 –the way most comics did in those days. Somebody had a comic book, it was community property. Passing comics around was a way in which we educated each other–and developed a shared sensibility. We didn’t want to keep them to ourselves.
Matter of fact, I think my first exposure to a lot of Mad–and other comics too; Peanuts, B.C., Fantastic Four and a lot of other Marvel stuff- was in those b&w paperback collections floating around the neighborhood.   I know for a fact that’s where I first learned who Jack Kirby was–and then who Chic Stone was.(I could’ve cared less about Stan Lee.–but Chic Stone was tops!) 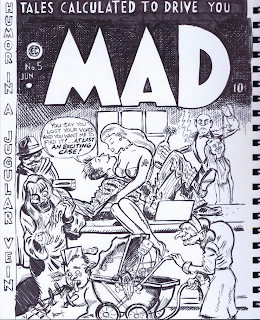 Even in the ’60’s, when Mad magazine was in its heyday, -and my friends and I sat on each others stoops going over every single gag in every single issue–these original Mads were special. They seemed like relics from a different, somehow more subversive, era–a little less predictable than the Mad we knew; wilder, not quite as formulaic.  They had super-heroes! “Super-duper Man” and “Melvin of the Apes”. And the art was just great, stuffed to the brim with little jokes and funny goings-on in the background. We’d look at them for hours because we kept finding some new joke in there that we hadn’t seen before. Astounding images–drawn by some guy named “Wood”–and boy did he draw great looking women(“Lois -Hah!-Pain!”) and great shadows and great everything! And man–they were so funny, funnier than Mad magazine, funnier than anything we knew. A kind of manic funny–wise-ass in a way the magazine of the ’60’s was not. Reading those original Mads, you got the feeling the people behind those comics had spent a lot of time in after-school detention, they shot spit-wads in Sunday school and had absolutely no use for authority figures, and as adults they were probably just this far from giving some bureaucrat at the DMV a hotfoot.

*This one was a good deal trickier to draw than it looks!