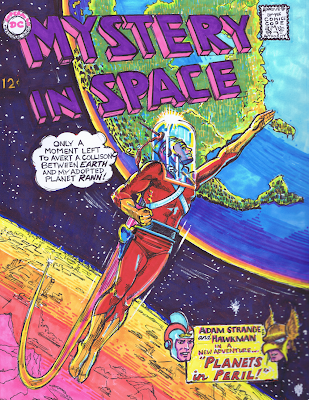 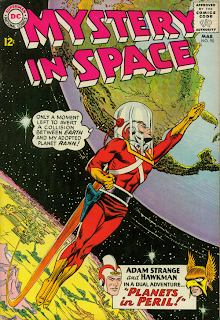 I loved what Paul Pope did for Adam Strange in the pages
of Wednesday Comics a couple of summers ago. Interestingly enough though, Pope’s “Strange” was more like the best Flash Gordon strip in years, rather than a traditional Adam Strange story. For me, Adam Strange is locked into a specific era, the late fifties-early sixties, the Friendship 7-Mercury rocket era U.S.– and a specific look–the clean, idealistic work of Carmine Infantino and Murphy Anderson. Infantino’s visualizations reek of the idealized urban future, and looking at his work from this period on “Strange” or for that matter, “The Flash“, you feel as though you have a telescope into the mind’s eye of a culture, and hold their imagined future in your hands.  As such, there’s an embedded sense of nostalgia–and loss- in Infantino’s work, loss of a particularly domesticated view of tomorrow, and with it, the loss of a sense of possibility.
This looks like an Infantino cover to me, although I’m not at all sure–and were I to guess, I’d say Joe Giella inks rather than the usual Murphy Anderson( although Anderson drew the heads framing the blurb.)