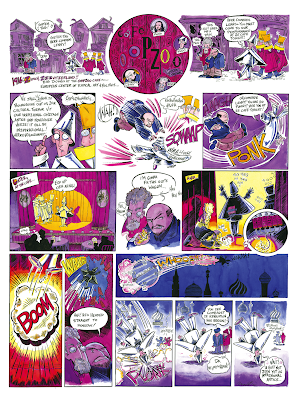 SINCE- Kevin Mutch, Alex Rader and I are in the throes of putting the new issue of pood–the BIGGEST newspaper comics anthology in existence!–together–, I thought I’d post my strip from pood #1  for those who hadn’t seen it–and which, as far as I know–has never been available online before. So–it’s almost like NEW COMICS! Oh BOY!
This little ditty is inspired and derived from a wee little segment of Modern Art history—the birth of the Dada movement at Hugo Ball’s Cabaret Voltaire in Zurich, Switzerland in 1916. It’s long been known that Vladimir Lenin was hiding out in Zurich at the same time as Hugo Ball’s little project was getting off the ground, and according to some reports, Lenin lived just down the block and may have hung out at the Cabaret once or twice.
#$%&!!!!!!!!!! $%&^!!!!! Holy Red Menace, Batman!

If Vladimir Lenin watching Hugo Ball and Tristan Tzara spout nonsense verse onstage doesn’t sound like potential for great comedy to you, then either I’m no astronaut or your not into grilled cheese. Cause it sure sounds ridiculous to me.  So--the idea of  turning  Lenin and Trotsky into the Katzenjammer Kids was  just too appealing.  (and no, Trotsky wasn’t there–but who could resist drawing that head of hair? and–before anyone goes there– don’t get on me about historical accuracy, for gosh sakes!–are you kidding? this is the Cafe OopZoo!)
My intention was to go for straight-ahead cartooning–which, if you know my work–is relatively rare for me.  It was a helluva a lotta fun.(and some anguish–I spilled gallons of Dr. Martin’s dyes all over the piece at several different steps in the process!!!)- I’ve been thinking about playing around with the characters again sometime–who knows?  Lenin and Trotsky as Hans and Fritz ? Well–watch for it here!
(But don’t expect to see them in pood #3–I’ve got other things in store for that one.) speaking of which:
News Flash: POOD #3 will be in stores in April –and should be(we hope!!!) together in time for MOCCA! So-look for the Blurred Vision table!

Here are some of the preliminary sketches for the Cafe OopZoo, from my sketchbook, Enjoy! 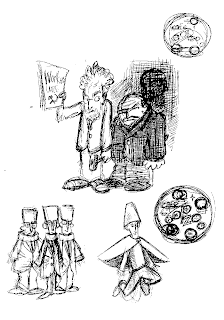 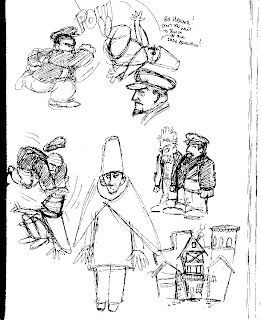 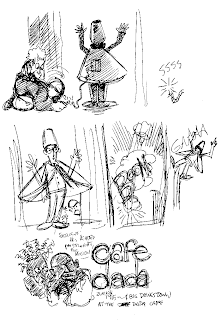 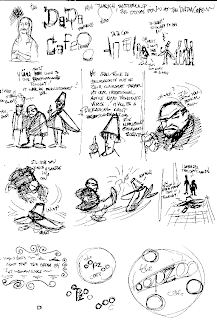 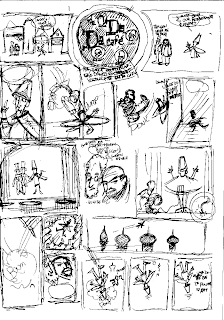 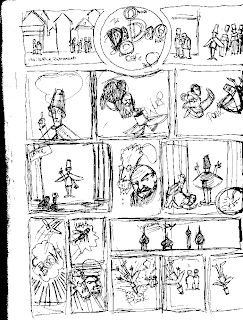