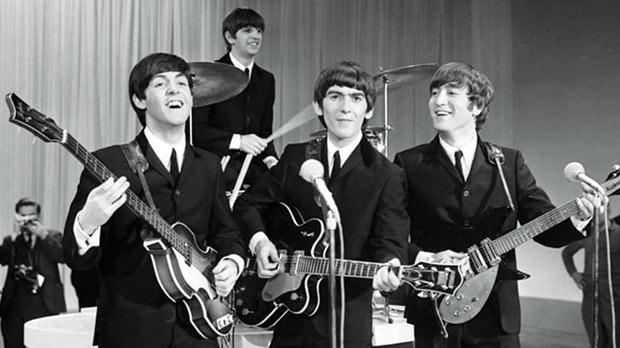 A personal memoir: yeah–it’s a cliche, but for me,there’s never been a more true one; The Beatles changed my life. I was a toddler and too young to remember the first show, but I remember the excitement surrounding them, and-some of my earliest memories are of them-a glimpse on a b & w TV; the first time I heard them on the radio( in the car w/my Mom and sister, Cathy). In those early days–for me, and millions others, they embodied happiness-their sound and their attitude--was so much joy. They were surprise! And their life force was infectious. They made a popular music that was their own ingenious, creative and personal art–and by doing so they “fulfilled my most far-flung dreams of the power of pop music”–and by some miracle of osmosis they sent a vibe through the culture that suggested all of us were creative, all of us had this power within us and if we were lucky, we could each find a way to be who we wanted to be-even if so many of us just wished we could be a Beatle too. Though I might’ve been left-handed, and for a brief stint, played bass in the school band( two months, tops!)-I wasn’t ever gonna be Paul McCartney–but I could find a way to be Geoff Grogan-and he could be his own artist, find his own way, through The Beatles,( and through Charles Schulz and Jack Kirby, and…and…). The Beatles (and later Dylan and Schulz and Kirby)-showed me that pop culture could be as great a platform for art as any other. The Beatles became very important to me very early on, and while they opened me up to lots of different musicians and types of music(ours was a musical household-thanks to my musician/artist Mom), they would-and will always be- my first love. Despite all the times I’ve heard their music and all the over-exposure,nothing compares to that sound for me. From the first time I heard them-it was like hearing a sound that had always been there somehow–yet lurking just behind the veil. After the music, in those painful first years after they had broken up, Paul and John showed me what it meant to be a loving husband. Later on, after John had gone, my wife and I bonded via The Beatles (and Dylan, and Star Trek). Deb and I were very fortunate to have the opportunity once to meet Paul( we can all cal him Paul, right?) -and when I shook his hand, the first stupid thing out of my mouth was “your music has meant so much to me”…duh. His eyes showed that he’d heard it a billion zillion times-something so easy to say, he probably doesn’t believe it anymore. But if I never had a chance to say another word to him, I had to say that-because it is the truth. My life would have been very,very different if I hadn’t heard The Beatles. I would rather not imagine a world without them–it’s like thinking of the the sky without blue.