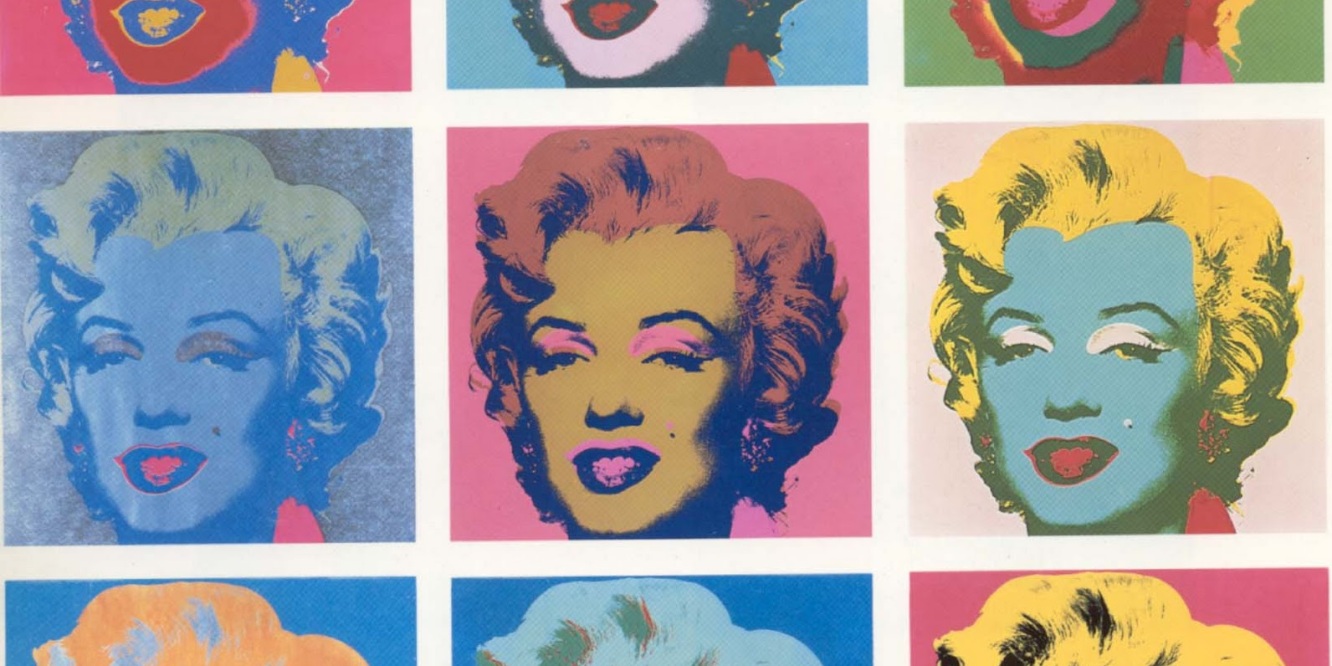 I’m not a Richard Prince fan. I lost patience with his dry appropriations of the Marlboro Man and other advertising images long ago. Argue what you will about these works; I find many of them obvious & banal at best, and an egregious display of PT Barnum style hucksterism at worst . Much of Prince’s work reeks of privilege, indifference, entitlement and elitism –all of the worst cliches about contemporary artists and their milieu which tend to piss off those not mired in artspeak.

I’m sympathetic to Patrick Cariou, the photographer who sued Prince and his gallery for using his original images without permission. I’d have done the same thing if it had been 41 of my photos Prince had appropriated and then sold for $10 million a pop or whatever it was.  Shit, yeah–where’s the money, pal?

But…. I’m a collage artist, appropriation is built into my post-modern bones, and while I sympathize with Mr. Cariou and his cause, I’m also somewhat troubled by the outcome of this case, and the possibility that the  thinking behind the decision may not be as nuanced as one in my field would hope it might be. Because among artists, there is appropriation–and then there is appropriation (other wise known as: how I learned the art of the steal for fun and profit.)

Not disputing that Cariou had the weight of rightness and morality on his side–I can only think that Prince’s lawyers mounted a fairly shoddy defense, for there are myriad examples of appropriation as a venerable artistic strategy available in Modern Art History textbooks. From Duchamp to Warhol, Lichtenstein and Levine, artists have been lifting images from artists and using them as raw material for at least a century or so–and not only getting away with it, but establishing tradition,  selling paintings of Mickey Mouse, Donald Duck and Superman for zillions of dollars and filling museums all across the country.  To dismiss such activity on the basis of Prince’s output would be overly zealous and simplistic, not to mention insensitive(…or downright oblivious…) to the cultural conditions of the world we inhabit. One might go so far as to say such blanket rejection might even be proof of a kind of paranoid schizophrenic personality, given this culture’s rapturous embrace and celebration of Pop Art, Andy Warhol and anything remotely associated with his work and the like. *

But …..it’s not for nothing that our appreciation of Pop and Warhol, Lichtenstein, et al.  is quite different than Prince’s rude reception and final rejection. While Lichtenstein’s appropriation of comics imagery may appear to be from the same kettle of fish as Prince’s now infamous “Rasta” series, it’s quite different. In Lichtenstein, the original material is transformed not only physically; comic book to canvas, print to paint, one part of a larger sequence to single image; but conceptually. And it is in the nature of the conceptual change we find the most significance. 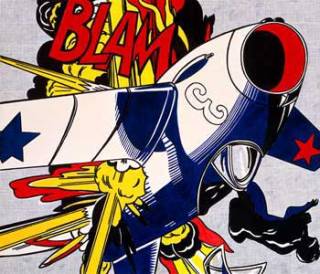 Warhol & Lichtenstein lifted images from “low” art-( at a time when such distinctions were thought to be crucial)-brought them into  a different context, the context of high art –thus “elevating” the low & debunking the pretensions of the “high” -bringing street into the rarified world of the gallery and museum–and establishing a kind of parity between them. The gesture, an arrow aimed in the direction of high culture, had political implications–about class, social status, about capitalism-about consumption, art and commerce.
Warhol took Clement Greenberg’s ideas about kitsch as a tool of oppression and stood them on their head (“….What’s great about this country…  You can be watching TV and see Coca-Cola, and you know that the President drinks Coke, Liz Taylor drinks Coke, and just think, you can drink Coke, too….” )

Prince argued that Cariou’s work was genre photography-and thus by implication, anonymous “low” art -as comic books and other articles of mass production were assumed to be in the 50’s and ’60’s– and therefore fair game for elevation to “high” art status.  But in the 21st century such distinctions are dubious at best– and with Cariou, who is a well known photographer whose work is already accorded “art” status, Prince’s appropriation was devoid of the sly, subversive quality of a Warhol or Duchamp.
( although-to point out the art-world’s continued perpetuation of class stratification, Cariou’s work is accorded a lower class of “art” status-i.e. that of the coffee-table book with a kind of “boutique-art” glow– something Prince’s series overcomes via sheer audacity–and the power and context of the Gagosian gallery. Never-mind that Prince’s own work is probably a Taschen coffee table book by now. But– you know–it’s of a different order of coffee table book.– and on and on and on it goes…. yawn.  One lesson–if there is even the slightest hint of an opportunity in which to manifest and perpetuate hierarchy, inequality and class distinction–we will find it and market it. And that’s how you sell a reprint of Marlboro ad for 10 million bucks. aura, baby, aura. )

Rather than subversive –Prince’s act was a kind of cultural imperialism, an example of the powerful and mighty appropriating resources from those they perceive as lower on the evolutionary scale(so to speak)– because they can, and because the machine that is the source of their power demands it. From the sound of it, Prince and Gagosian (his dealer) displayed incredulity at the suggestion that the photographer was an artist in his own right.

That the judge in this case perceived the distinctions in intent, or is in sympathy with Warhol, Lichtenstein and Duchamp’s subversions,  I’m in doubt. According to the report I read, the decision hinged on the word “transformative”-as stipulated in the fair use clause of the copyright act of 1976. Accordingly, the judge determined that Prince’s appropriations were not “transformative”and so failed the test of “fair use”. 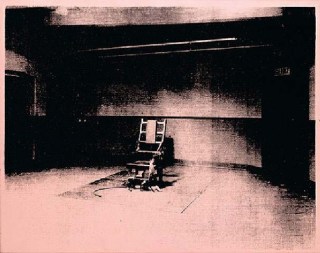 There’s no one better than Duchamp and Warhol to illuminate the ambiguities of this matter.
Both the Warhol “Electric Chair” and the Duchamp “L.H.O.O.Q.” are appropriations of pre-existing imagery. Neither one is visually or physically modified  much more than Prince’s “Rasta” works.
But...there are absolutely crucial differences in intent-(some of which I’ve outlined above)
and the resulting conceptual transformations have proven to be exceedingly potent in their ability to challenge–our ideas about art, about media, about history, context,  originality, creativity, on and on and on. As one critic once said–“they’re little thought-bombs”—and their power to initiate lies in the gesture, more than in the physical.
And the power of collage, mixed-media, and much of contemporary art –to challenge entrenched patterns of thought,–to “wake us up to the lives we are leading”– lies in its abilities to reconfigure knowns and unknowns, to bring a thing from one place into another, so that we might see it–and ourselves–afresh.  Its a transformation of ideas. 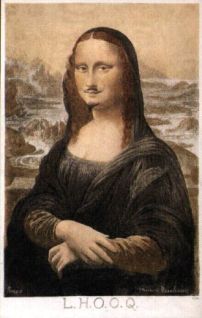 * By the way, I bristle every time I see a Curt Swan “Superman” attributed to Andy Warhol. Intellectually I understand and sympathize with the methodology, but dammit–it’ll always be Curt Swan to me. Yes, I admit to being conflicted.

***my info & understanding of the Prince case comes from this article.

One Reply to “Transformative Use”