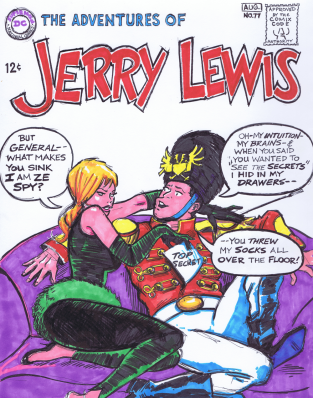 Jerry Lewis comic books? What the $#*%!? Who’s idea was this? I have no idea what the equivalent comic would be today-Jimmy Fallon comics? Will Ferrell? Somehow-the idea was more appealing than the comics–and well, that’s not saying much.
Will Ferrell comics? ( some comics publisher somewhere is rushing off to license that property, I’m just sure of it!)
But still, it held on for nearly 20 years! From 1952-1971, DC published a comic book starring Jerry Lewis, first as “The Adventures of Dean Martin and Jerry Lewis” and then, after the comedy team broke up in the mid- fifties, known simply as “The Adventures of Jerry Lewis”.
The comics could be amusing-but never quite  LOL funny as they should have been.  But–JL did have the good fortune to be drawn by the late, great Bob Oksner, whom I believe drew this cover-and had a capacity for caricature and a talent for drawing rather fetching women, as you can see in this example. Over the course of his long but reatively unsung career, Oksner drew many a romance comic, a whole lot of Bob Hope, Shazam!, Supergirl and any book that needed attractive women and recognizable celebrities. He had a rich line, and a spare, clean style that never felt restrained or minimal-sort of like a cross between C.C. Beck, Curt Swan and Dick Giordano. Coming across his work in a comic was a treat, because you knew you were in for an attractive, consistent package, if not an innovative one.
I enjoyed these comics in their day, mostly for their out and out silliness.  They are a reminder of a period when celebrities were somehow simpler cultural constructions and mainstream comic books on the spinner racks at the drugstore included humor and an array of genres amidst the super-heroes.