Lissen, I didn’t have a great NYC Comic-Con. Sales were slow, and I was wearing some kind of invisibility cloak or something-I don’t know. How do you make the best out of a bad at a comic con? Buy some original comic strip art! So dig it-I picked up a daily “Johnny Hazard” by one of my all-time favorite cartoonists-Frank Robbins.

My first introduction to Robbins’ work was as a writer for a variety of Batman comics at DC in the early ’70’s. I knew nothing of “Johnny Hazard”-the daily comic strip he’d been doing since the forties. I didn’t know he was an artist. He was a solid, interesting and relatively dark writer–and he would have been utterly out-of-place in the pages of Batman at any time earlier. But Robbins not only wrote Batman–he drew as well–and so I finally saw the complete package in the pages of “Detective” in 71 or 72. In those days-Neal Adams was the man and his super-cool, beautifully polished brand of realism was THE style Batman fans drooled over. And if it couldn’t be Adams, then it had to be the suave, sophisticated Jim Aparo. Robbins–with all of his brushy inkiness, his hyper-kinetic figures, his jittery line, his animated pages–was a rude shock to the system in those days. 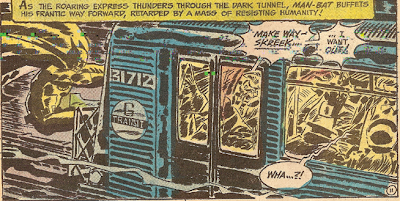 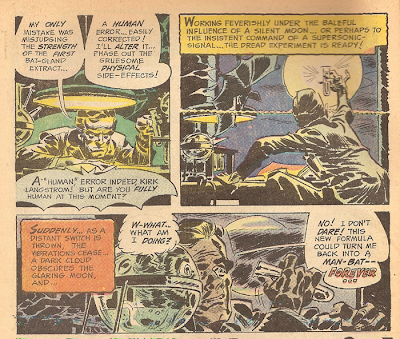 Needless to say, those very qualities that put me off back when I was a kid are exactly the ones I cherish in Robbins’ art today. His pages are so alive–and utterly without pretense. Without resorting to splashy layouts or graphic gimmickry, Robbins invests every single line, every figure, every object, every page– with animation. These pages live, man! You can feel the sweat off of his characters–and its not because Robbins felt he had to draw the beads of perspiration dripping down a forehead.

Despite his success as a respected cartoonist in the hallowed land of the daily adventure strip, amidst the likes of Caniff and Gould, Frank Robbins had the bad luck to follow fan favorite artists on at least two titles in the Seventies: The Shadow–which he picked up after what has become a legendary run by Mike Kaluta on the first issues of that title–and then stalwart Sal Buscema on Captain America. The outcry was intense-particularly after Robbins took on C.A.–which, in the hands of Steve Englehart and Buscema had developed a particularly compelling storyline and a devoted audience. Buscema had left his mark via a rather bland but dependable application of Marvel’s 1970’s house style–and Robbins, whose work was nothing if not highly individualized–was like a smack in the eye to readers who’d grown accustomed to Buscema’s non-offensive conventionality. Initially I was among those who was irate at Buscema’s replacement–and for a moment I wavered in my support of the title. But this was the “Nomad” storyline–and Englehart kept me coming back for more. Somewhere through my second reading of CA #182-I was hooked. Robbins characters were so passionate, his figures so contorted, twisted and alive. Nomad’s travels across city-rooftops were imbued with animation and danger– Robbins’ figures in space could just as easily fall to their deaths as traverse the alleys between buildings. 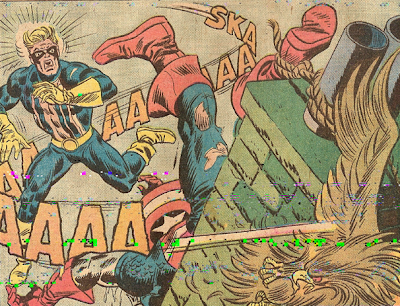 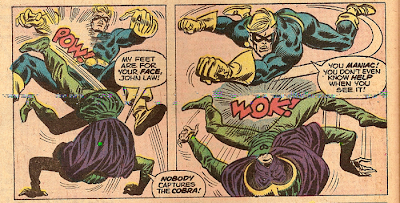 Robbins stayed with Cap for another year or so–and then with Roy Thomas he originated “The Invaders” –and left his mark on one of the first truly post-modern adventure groups in the Marvel canon He continued to produce “Johnny Hazard” until 1977. How he did comic books and comic strips simultaneously is beyond me. I lost track of his career–I’ve read he retired, quite happily, to Mexico after “Hazard”. He certainly didn’t need to hang around and take all of the crap heaved at him by irate fanboys calling for his head after Buscema left C.A. But I cherish those issues of Captain America, those dark and inky Batmans. I keep that work accessible to me in my studio-right along my copies of Kirby and Canniff and Eisner. I refer to it frequently—hoping a little of the life in his drawing seeps into mine.

But Frank Robbins was inimitable—and the qualities that make him great are those of personality and sensibility, they come around once and once only.

One thought on “Frank Robbins saves the NYC Comic-Con”