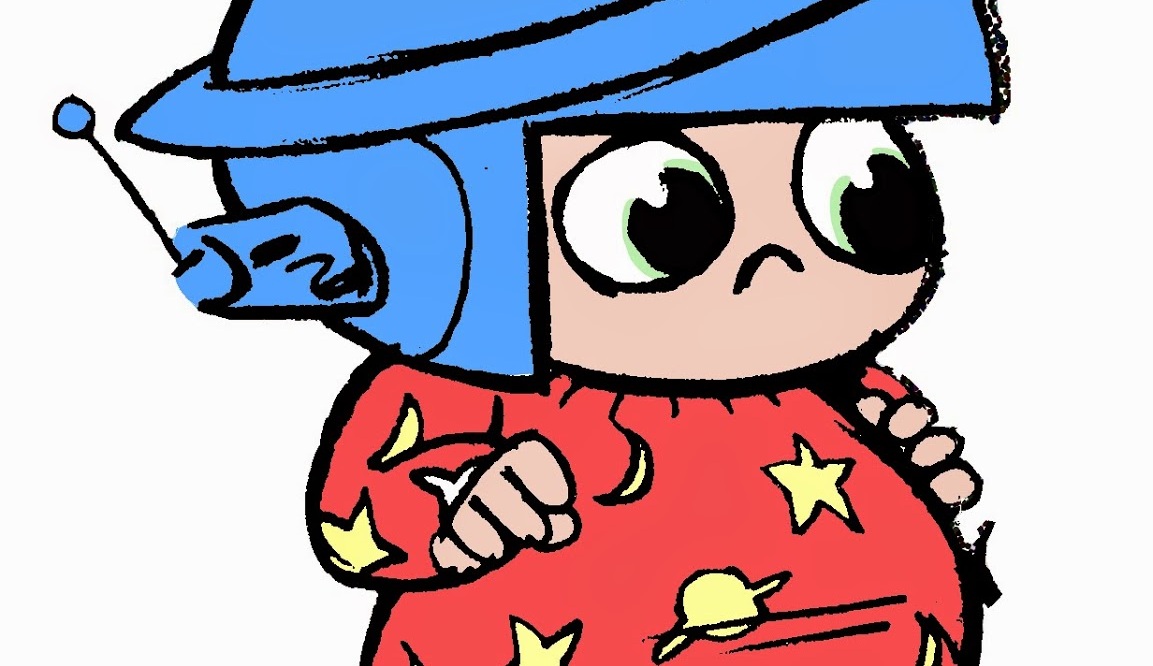 Let’s face it, the title sucked. More than one person told me “Plastic Babyheads from Outer Space”  turned them off before they ever read the comic, and well–it certainly didn’t attract readers to the strip.  I have a theory that titles ending with  “…from Outer Space” (post 1950’s ) are doomed to ignominy.  For years I’ve avoided watching Killer Clowns from Outer Space– just because. I’ve tried recalling any film, book, comic, pop-culture relic post 1960 with “..from Outer Space” in the title. Nothing comes to mind.( nothing good, anyway)  It seems a sure-fire path to the cultural trash-can.
Well, it’s a theory, anyway. Maybe it was the “Babyheads” bit. I’ve got to admit, the image is just a wee bit…uhm… bothersome. Particularly if you have a soft spot for babies. (and who doesn’t?) One way or another, the title was a bomb.
So, I thought–what the hey-let’s change it up a bit.  I’ve got nothing to lose.
And thus, this week– Jetpack Jr. begins on GoComics.com  and Plastic Babyheads comes to a close–sort of.  It continues, albeit in slightly altered fashion.(Thanks to everyone at GoComics.com for supporting the change.)
All things in time and it took time for
Jetpack to arrive. You might say it was a protracted gestation period. Three years as Plastic Babyheads from Outer Space before the characters began to emerge from the crowd. Where did the time go? What took so long?
I’m not one for forcing the issue, I suppose. Hey, I stumbled into the strip–came at backwards-and in those rocky beginnings, never thought it would last.  But the strip has its own momentum and it’s pulled me along in its wake. And as time went on, certain voices spoke louder than others. It really is true, the characters tend to find their own direction. And so, this is the path Jetpack Jr., Hank and Marsha, Rensselaer, Kramden, Bella Dilemma and a few old friends(as yet to reappear) were determined to follow. I am excited about it–and if you’re reading this, I hope you are too. Where they want to go, they haven’t told me–yet. We’ll find out together. Meanwhile, this blog will be a place for me to let what’s left of my hair down-a bit–put up some stuff on process and inspiration, or just talk about stuff I’m looking at, reading, listening to, stuff that I like. A casual affair. Hope you’ll drop by often.