What can I say? I’m a Hellboy fan. And proud of it.  Hellboy is the only mainstream comic I follow with any regularity. And I’ve read and re-read his collections many times. They never fail to captivate and entertain.

You don’t need me to tell you what’s great about Mike Mignola or Hellboy-but I will tell you I dig Mignola’s story-telling, his deliberate pacing, the inter-cutting of static images steeped in atmosphere and his ability to convey a palpable sense of the “invisible plane” supporting the visible world. Hellboy is rich in mythology, theology, folklore, spirituality, demonology;  you name it-whatever ghoul or goblin is your particular cup of tea, Mignola makes them live in the pages of his comics.
I particularly dig Mignola’s intelligent sense of design–the compelling graphic quality of his images, the simplicity of his forms and his ability to convey a sense of place, atmosphere and environment, in images stripped of excess and unnecessary information. Mignola’s respect for 2-dimensions and modernist pictorial space, his stark use of black.
Among Mignola’s contemporaries, perhaps only Frank Miller in Sin City works so well in the language of graphic modernism derived from Alex Toth.

So here’s some fan art from a real admirer– my first attempts at drawing Mike Mignola’s Hellboy. 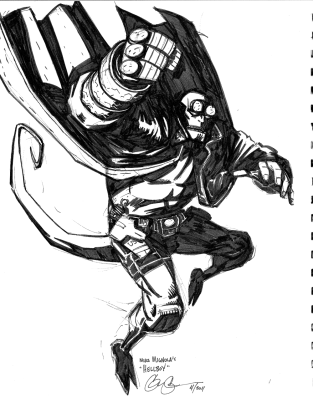