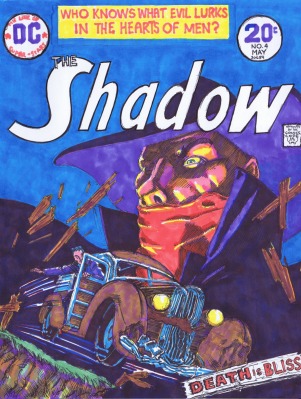 Was there ever a better version of the Shadow, in print or on radio, than O’Neil and Kaluta’s?
When these came out I was 13, and the local radio station had just started to play recordings of old time radio shows from the 30’s on Saturday nights. A perfect storm of Depression era atmosphere, I lay transfixed on the living room floor listening to Orson Welles maniacal laugh( you should hear the commercials: “You will skid out of control–without Goodyear Tires! HAHAHAHA The Shadow knows!” )  while looking at Mike Kaluta’s pulp-y images of a wraithlike Shadow creeping in and out of the darkness. Ruthless, elusive, without remorse, The Shadow killed people for just thinking about bootlegging! And whenever did you ever see a superhero with a schnoz like Kaluta’s Shadow?  The perfect proboscis for sniffing out rum-runners and the like.
These are still some of my favorite comics, and I’m sure I re-read them at least once every year or so.
What makes a great comic, a comic you return to year after year? In the end, I think it’s kismet, magic, undefinable alchemy-the perfect meeting of subject and creator. As much as I am a teacher and a student of all that goes into “Art” and its making, I trust more in that which you can’t control, can’t circumscribe by definition or analysis. Analysis-no matter how insightful(& necessary)-always comes up short in the end. I’m not sure anyone knew that Mike Kaluta was born to draw the Shadow-I don’t think any of the work he’d done prior gave the impression that he was the artist for it.
But boy was he! And these first few covers, apparently a combination of watercolor and
pen and ink-are still among some of the most  iconic and evocative images of the character  I know. 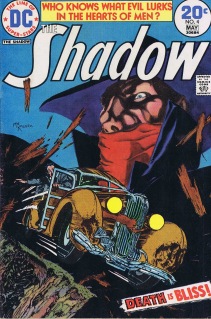 So when I first started this little project, these early “Shadow” covers were the first I chose. And initially, I was just going to sketch them out in b & w. I was well into it before I found I wanted to add color. The image above was my second shot at “The Shadow no.4”
Below was my first try-took about half an hour-45 minutes at my office desk, after working hours and when I wanted to wind down some from a busy day.
And yeah–I spent the rest of that evening re-reading this wonderful, classic comic book and drinking in the wonderfully inky images of Mike Kaluta.

One Reply to “Mike Kaluta knows The Shadow!”